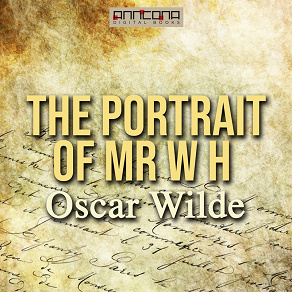 The Portrait of Mr. W. H. is a story written by Oscar Wilde.

The story is about an attempt to uncover the identity of Mr. W. H., the enigmatic dedicatee of Shakespeare's Sonnets. It is based on a theory, originated by Thomas Tyrwhitt, that the sonnets were addressed to one Willie Hughes, portrayed in the story as a boy actor who specialized in playing women in Shakespeare's company.

This theory rests on the assumption that the dedicatee is also the Fair Youth who is the subject of most of the poems. The only evidence for this theory is the text of a number of sonnets themselves (such as Sonnet 20, that makes puns on the words "Will" and "Hues").

The Portrait of Mr. W. H. was first published in Blackwood's Magazine in 1889. It was later added to the collection Lord Arthur Savile's Crime and Other Stories, though it does not appear in early editions. Audiobook read by James K. White, running time 1 hour, 12 min.