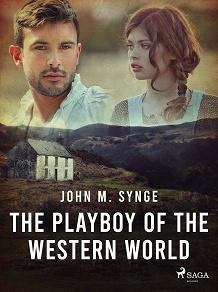 The Playboy of the Western World

by John Millington Synge
On a quiet autumn evening, the inhabitants of Flaherty’s ramshackle pub are interrupted by the arrival of Christy Mahon, a fugitive claiming to have murdered his father. Enamoured by his story, the whole village soon find themselves toasting Christy as a hero, whilst Flaherty’s daughter Pegeen falls in love with his roguish charm. However, an unexpected arrival from Christy’s past threatens to collapse his newfound fame. <br>J.M. Synge’s ‘The Playboy of the Western World’ (1907) is a hilarious three-act play that honours the Irish lyrical speech. A highly controversial play of its time, riots formed on the opening night of the play to protest what they saw as offensive content that mocked the Irish. As Synge’s most popular play it has had numerous adaptations on stage and screen. The play is riveting, with central character Christy Mahon playing like a cross between ‘Harry Potter’s’ Gilderoy Lockhart and Jim Carrey’s Truman from ‘The Truman Show’. For any fans of comedy, or for those who are looking to understand more about the beauty of the Irish dialect, ‘The Playboy of the Western World’ is a must read!<br><br><br>Edmund John Millington Synge (1871 – 1909) was an Irish poet, playwright, and a defining figure of the Irish Literary Revival. Born in County Dublin to upper-middle-class Protestants and suffered from Hodgkin’s disease which led to his home-schooling. Soon after graduating from Trinity College Dublin, Synge became a renowned poet and playwright, but his success was short-lived as he passed away from cancer at 37. He is best remembered for his play ‘The Playboy of the Western World’, an incredibly controversial work at the time of its publication and performance. Regarded by Yeats as ‘the greatest dramatic genius of Ireland’, Synge has held a lasting legacy, being a key influence for acclaimed Irish playwright Samuel Beckett and the subject of Joseph O’Connor’s novel ‘Ghost Light’ (2010).