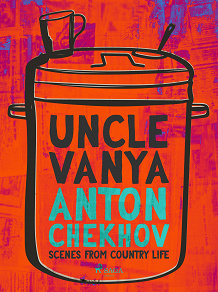 by Anton Chekhov
When Professor Serebrakoff and his younger wife, Helena, return to his rural estate, they find themselves less than welcome. Despite the smiles and formality, there is tension in the air and all roads lead to Helena. A family friend, Dr. Astrov quickly falls in love with her, as does the eponymous uncle. ‘Uncle Vanya: Scenes from Country Life’ is one of Chekhov’s greatest plays, and expertly demonstrates the power of subtext. What most of the characters say in this play, is not necessarily mean. It has been performed countless times across the world, most notably starring Toby Jones, Ciaran Hinds, Cate Blanchett, Peter Dinklage and Ian McKellen.

Anton Pavlovich Chekhov (1860 – 1904) was born in Taganrog, in Southern Russia. The son of a grocer, and the third of six children, he was educated at the local Greek School. After Chekhov’s father became bankrupt, the family lived in poverty, before fleeing to Moscow to avoid debtor’s prison.
After writing a series of tales for various publications, Chekhov started to gain critical attention. However, it was a trip to the Ukraine that put the literary wheels in motion. After the publication of his novella, ‘The Steppe,’ he was commissioned to write a play, resulting in ‘Ivanov.’
Over the course of his career, Chekhov wrote more than 200 short stories, and 14 plays. Works, such as ‘The Seagull,’ ‘The Cherry Orchard,’ and ‘Uncle Vanya,’ have been performed on stages across the world.