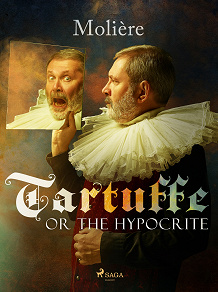 Tartuffe, or The Hypocrite

by Molière
In this witty and charming French play, the audience follows Madame Pernelle, whose self-importance leads her to leave her son Orgon's house because no one pays any attention to her. The only person who happens to meet her high expectations is Tartuffe.

While Tartuffe's true character of being 'the Hypocrite' is slowly revealed to the audience, Madame Pernelle remains blissfully unaware of the fraud who exploits his victims by pretending to be pious.

Madame Pernelle is on the point of leaving many times, but can't leave without having the last word and finds herself coming back to admonish or criticize one more person.

Molière's ´Tartuffe, or The Hypocrite´ puts a satirical spin on religious hypocrisy and will delight fans of Shakespeare's ´The Taming of the Shrew´.

Jean-Baptiste Poquelin, known by his stage name Molière, was a French playwright, actor, and poet. He is widely regarded as one of the greatest writers in the French language and world literature.

Molière wrote comedies, farces, tragicomedies, and comédie-ballets. His plays have been translated into every major living language and are performed at the Comédie-Française more often than those of any other playwright today.

He was born into a prosperous family and studied at the Collège de Clermont which made him well-suited for a life in the theatre. Molière spent thirteen years as an itinerant actor, which helped him polish his comedic abilities. While acting, he began writing, combining Commedia dell'arte elements with the more refined French comedy.