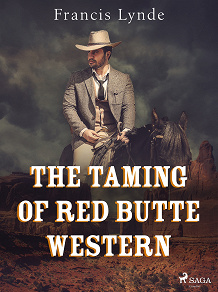 The Taming of Red Butte Western

by Francis Lynde
This is a tale of a railroad in Western America that is rampant with fraud, murder, and a stolen steam engine, while one less-than-tough man in the midst of it all, tries to overcome misfortune and resentment with his courage and love.

Francis Lynde's ‘The Taming of Red Butte Western’ is a railroad, Western novel that will be enjoyed by fans of ‘The Lone Ranger’.

Francis Lynde was an American author whose novels were set in the mountains of Colorado, Nevada, and Utah, and the stories often revolved around mining or railroad engineers.

Three of Lynde’s novels were adapted for film – ‘Across the Burning Trestle’, ‘Stranded in the Arcady’, and ‘Bucking the Line’ (based on his 1915 novel ‘The Real Man’).

Alongside his novels, Lynde also published a collection of short detective stories that would be enjoyed by fans of Sherlock Holmes, entitled ‘Scientific Sprague’.