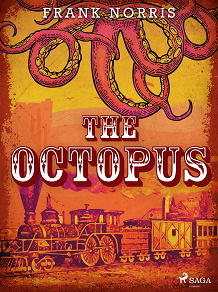 by Frank Norris
An unsentimental look at the lives of farmers and businessmen in the late 19th century, ‘The Octopus’ details the expansion of the railroad, its tracks spreading out like tentacles across the US.

We follow the farmers as they are slowly crushed by the pressures put on them by this new industry, due to the greed and corruption of cold, corporate businessmen, who are willing to go to unsavoury lengths to ensure they do not lose out on the possible financial rewards.

Written without any romanticism, ‘The Octopus’ gives a fascinating insight into the effects of industrialism, and the subsequent avarice that inevitably follows.

Frank Norris (1870 – 1902) was born Benjamin Franklin Norris, in Chicago. Widely hailed as the first American ‘naturalist’ writer, he was the son of a self-made businessman and an actress. After the death of his brother, Norris went to Paris to study art at the Académie Julian. While there, he was introduced to the novels of Émile Zola, who was to profoundly influence his work.

His later studies at the University of Berkeley exposed him to the works of Charles Darwin, which would heavily impact his writing. It was at university, via the ‘San Francisco Wave´, that he first published his stories. When he left Berkeley to go to Harvard, he was persuaded to pursue a literary career by fellow author, Lewis E Gates.

Many of Norris’ works deal with how corporate corruption affects those at the lower end of the financial spectrum, and further act as fantastic documents of American life in the late 19th century and the early 20th century.